​Sporting CP come back from behind at the Estádio José Alvalade

Sporting Clube de Portugal bested Casa Pia AC 3-1 at home on Matchday 10 of the Liga Portugal season. The team bounced back from a 0-1 deficit at halftime, with goals from Paulinho, Nuno Santos and Pedro Gonçalves in the second half.

Rúben Amorim made three changes to the starting lineup, bringing Antonio Adán, Manuel Ugarte and Pedro Gonçalves in to replaceFranco Israel, Sotiris Alexandropoulos and Paulinho. On the substitutes bench, young talents Chico Lamba and Mateus Fernandes were called up for the squad.

The first half was almost exclusively one-way traffic, with two rare exceptions. Sporting CP dominated in terms of shots, possession and corners, and had several chances to score. The first came just five minutes in, when Pedro Gonçalves sent in a corner, a defender deflected it and Marcus Edwards, at the far post, headed wide when in an excellent position.

Another great chance followed, this time with Gonçalves shooting. Casa Pia AC goalkeeper Ricardo Batista - a former Sporting CP player - made the first of a number of quality saves.

The first exception to the trend came in the 15th minute, when Casa Pia AC, on a counterattack, hit the post through Clayton. Sporting CP reasserted their dominance in the opposition area soon after, when Pedro Porro headed and was denied by Batista.

In the 33rd minute, a strong shot from Gonçalves was again saved, and Batista also got down to deny Hidemasa Morita.

Just before the break, Casa Pia AC got their second opportunity, and managed to convert it. On another counterattack, Clayton put the ball into the back of the net and gave the visitors a 0-1 lead. 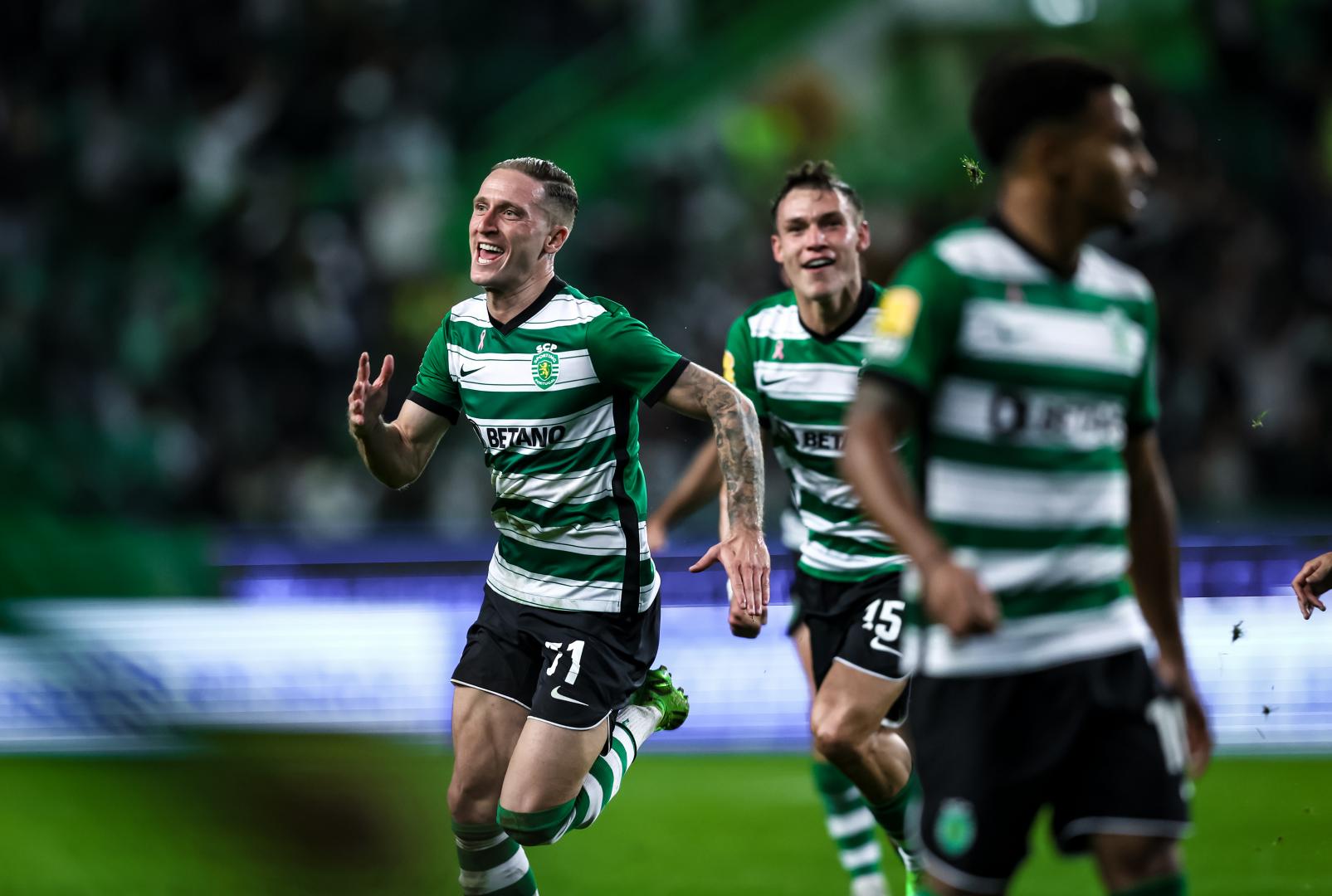 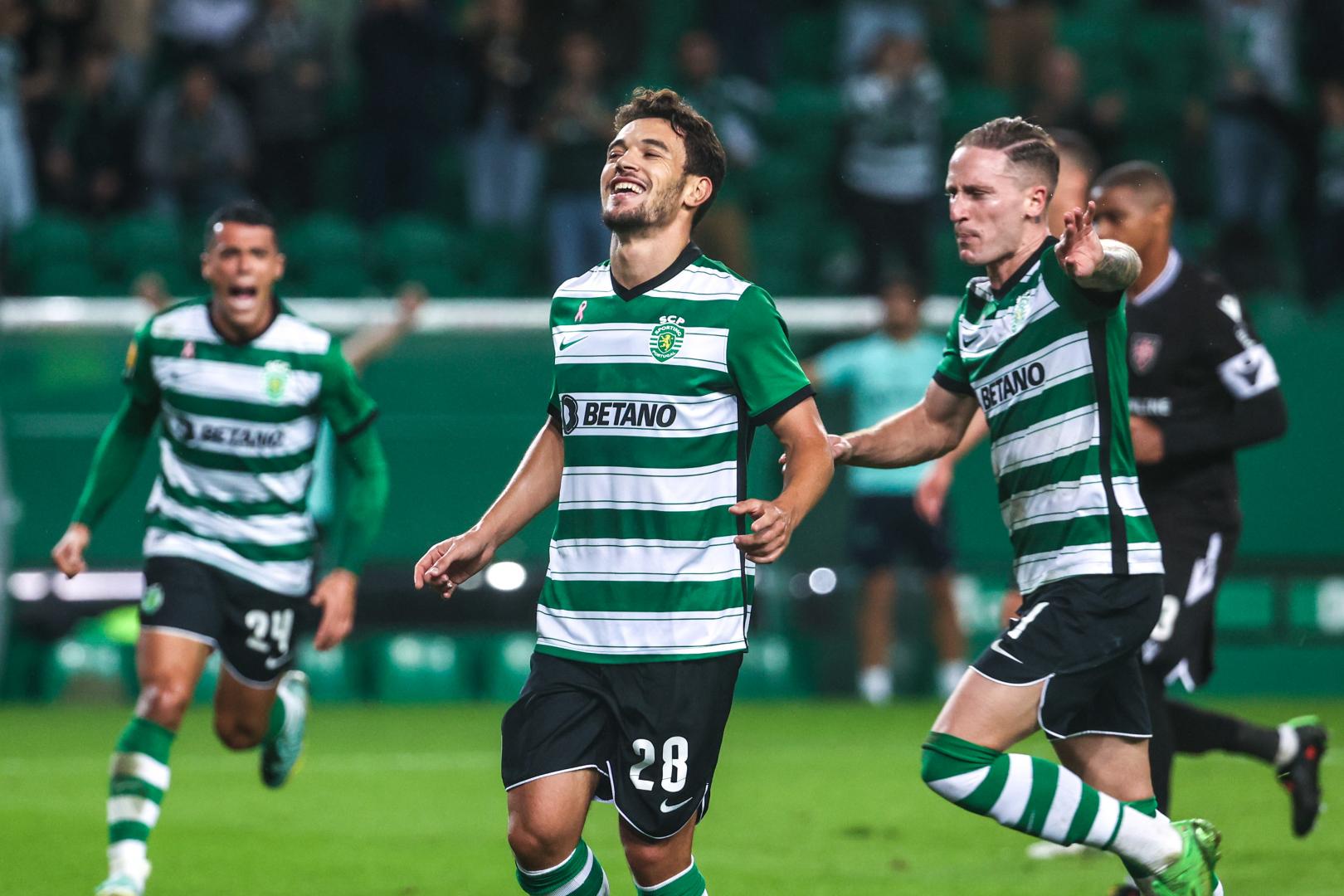 Chico Lamba came on at halftime in place of José Marsà, to make his debut for the Sporting CP first team.

In the first minute after the restart, Manuel Ugarte had a shot tipped away by Batista. Gonçalves followed up with a shot into the side netting, and Francisco Trincão, at the conclusion of a great solo move, hit the post.

The equaliser seemed inevitable, and came in the 57th minute. An excellent arching shot by Porro, with his left foot, stung the hands of Batista, but this time Paulinho was on hand to finish off the rebound with his head.

Two minutes later, Porro served up a cross for Nuno Santos and he finished first time, to the delight of the fans at the Estádio José Alvalade.

With momentum in their favour and about half an hour remaining, Sporting CP kept up the pressure. Porro - who had been involved in the previous two goals - shot wide from a good chance.

In the 64th minute, a penalty kick was awarded after Marcus Edwards was brought down in the Casa Pia AC area. Gonçalves converted coolly to take the score to 3-1.

Arthur Gomes came on to replace Gonçalves and, in the 78th minute, Mateus Fernandes was introduced to make his debut. Flávio Nazinho replaced Pedro Porro.

Nazinho came close to scoring in one of the first interventions, but the ball went wide of the post. Fernandes also tried his luck with a shot in a dangerous area, striking over the top.

The game ended 3-1, returning Sporting CP to winning ways and preparing them for a Wednesday visit to Tottenham Hotspur in the UEFA Champions League group stage.