“You really need a good balance"

International Congress The Future of Football

The Portuguese national coach, Fernando Santos, spoke with Sporting TV in an extensive interview as part of this week's The Future of Football International Congress. Asked about what it takes to win on the top European stage, Santos highlighted the importance of self-belief.

“My conviction that we could win Euro 2016 was linked to the quality of Portuguese football. That was the foundation of it. We have a lot of quality players, in our training and in our organisation, so of course I believed", opened the Portuguese coach, continuing: "We have to be fully aware of what is needed to win and that means scoring goals, but we also have to know how to defend. You really need a good balance at both ends. In football there is only one thing you can sure of: if you don't let goals in then you won't lose."

"Dad, you are going to play for our club"

Beto sits down for an interview Sporting TV

After spending 11 years in the Sporting CP young system, Beto Pimparel returned to his spiritual home this season. Speaking in a lengthy interview with Sporting TV this week, the Alvalade keeper reflected on the opportunity to make the move back to Lisbon.

"When I heard that Sporting CP were interested, I asked my agent where I had to sign. Then when I called my son he cried and said 'dad, you are going to play for our club'. That really was a special feeling", said Beto, adding: "Unfortunately after 11 years I didn't get into the senior team, but this is really important to me because I promised a person I really love that I would play here."

Currently 34 years old, Beto isn't about to take off his gloves just yet: "Why not finish my career here? I haven't put a limit on anything. I could play for four or even seven more years. The people who work with me know I am a professional and I love training and playing. I always try to do my best. I feel great and well motivated."

Speaking about the years he spent in abroad, Beto proved happy to be back on Portuguese soil: "When you are far away from home you miss your family. Technology helps, but it is nothing like giving a hug on the days when you don't feel so good. It was hard, but I knew what I was doing when I went. I tried to explain to the kids why I had to go, but it was hard. Seeing my son look at the map between Porto and Cluj in Romania was hard, but today he understands that it was to make a better life for us."

"I feel natural when I am on the pitch"

William Carvalho sat down with Sporting TV this week for an extensive interview, covering everything from the midfielder's most nervous moments to the importance of spells out on loan.

SPORTING – In a recent interview you said that you felt nervous on three occasions: your debut for Sporting CP, your first cap for Portugal and the final of Euro 2016. How about now, is this another occasion?

WILLIAM CARVALHO – [Laughs] No, I wouldn't say that. This is something that I always do, so I am used to it.

It is easier to make a successful tackle or talk with a journalist?

[Laughs] tackling. I feel natural when I am on the pitch.

What about in training, do you still get the odd butterfly?

Training is normal for me after so many years.

How about out on the pitch then? Do you still think about your debut?

Not really, but I feel the same responsibility of representing a big club that I did on the first day.

Your made your debut in 2010/11, against Guimarães (replacing Matías Fernández in the 89th minute). You then went out on loan with Centro Desportivo de Fátima (six months) and then Cercle Brugge (one and a half seasons). What that important for you?

Yes, it was. With Fátima I actually played as a central defender for five or six matches, which I wasn't used to. I adapted well and it was good for my experience.

Would you say that it is important for the younger players in the squad to spend time out on loan? João Palhinha, Daniel Podence or Francisco Geraldes, for example.

Of course. They were on loan for half of the season and they gained a lot of maturity and experience. Today they bring extra quality to the squad.

So how much can a player actually grow in that kind of situation?

On the pitch you can a lot, because you play a lot. That is the only way a player gets better. Sometimes at a club as big as Sporting CP we don't have a lot of opportunities, so it is better to go out on loan and come back stronger. 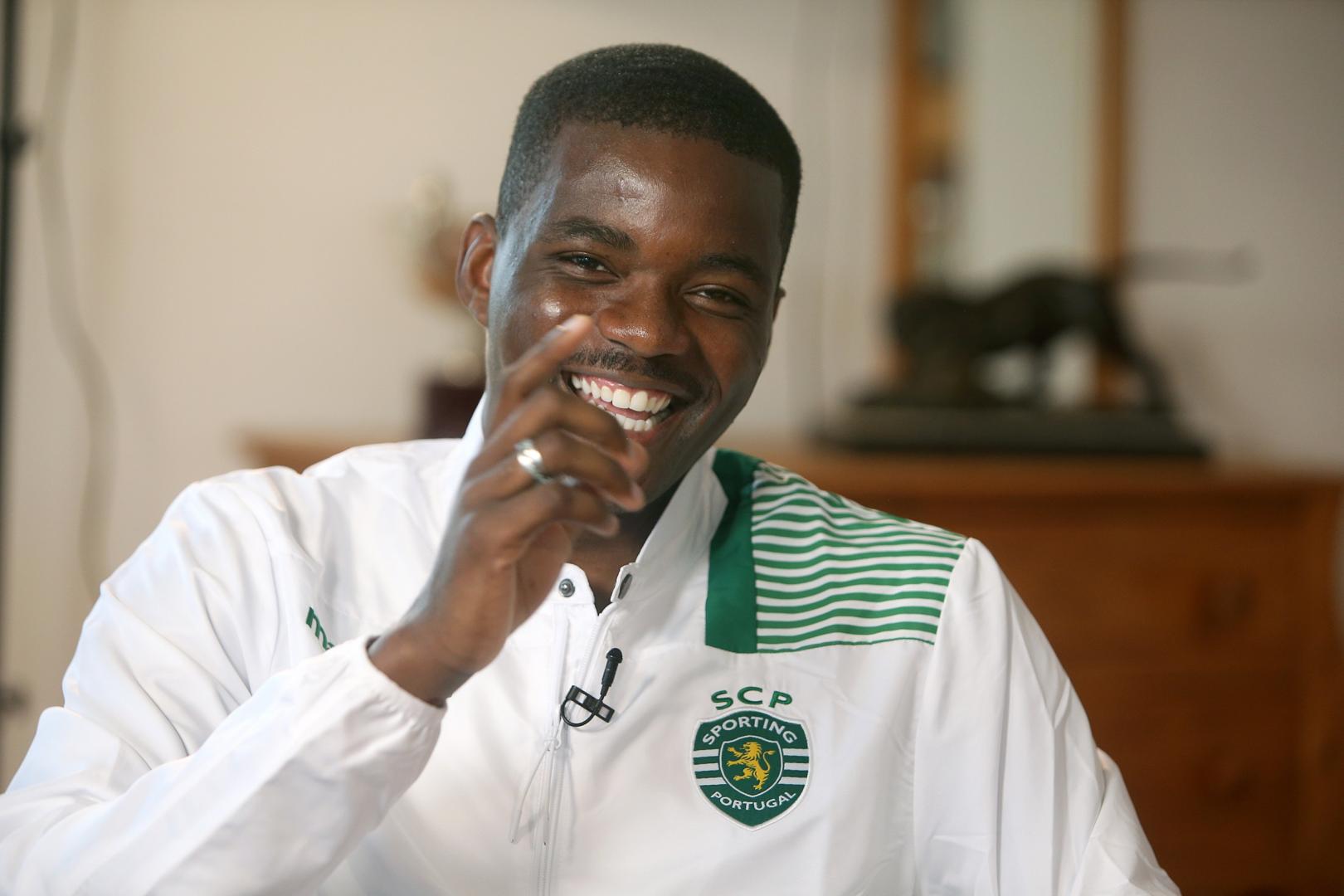 We recently heard that when we take you our of your comfort zone (the Sporting Academy)... well what about in the kitchen?.

[Laughs] Well I can do the basics.

"I had some great passes to finish"

"It was a great feeling. I wasn't totally happy, because I had a chance to score five, but I was really happy the next day. I am really happy with the four goals and the result. I had some great passes to finish. Daniel Podence did a good job as a second striker and it is important to be the top scorer in the league", said the Dutchman, adding a word on the race for the European Golden Boot: "I don't think about it that much. Our priority is the league. A lot of family and friends have mentioned it and I didn't think I could score four goals. Five will have to wait until next time and with this team, it is possible."

To finish, Bas Dost saved a word for the fans: "We play away in small stadiums a lot of the time, but we always have fans there. It gives us extra strength and it is like playing at home. I couldn't even hear the Tondela fans. Now I want to score against Nacional."

Sporting CP's Ezequiel Schelotto gave an extensive interview with Sporting TV this week, speaking about his relationship with Jorge Jesus and his new-found opportunity to show what he is capable of.

"This is a very well known team, where really famous players like Beto Acosta have played. Sporting CP is always in European competitions and I already knew Jesus for what he had been doing. I didn't hesitate for a second when he called me", opened the wing-back, adding: "I wasn't playing a lot and I took a decision together with my wife. After two years with Parma I decided to finish my contract. After that I waited for two months for an opportunity, which came through Jorge Jesus. He wanted to take to me and I am really greatful."

Schelotto also revealed what was said in his first conversation with Jesus: "He said to be: Ezequiel, you are coming here to play at right-back. We spoke on the phone, because I was in Italy, but when I arrived in Portugal he told me that he would help me adapt to the new position and that I would have to work hard because no one is guaranteed a place in the team here. It took me two months to adapt and I had already been out of training for two months. I really like Jesus' energy and all I can do is try and repay the confidence he has shown in me. I have learnt a lot."

“Have confidence in us"

Paulo Oliveira speaks with Sporting TV in a lengthy interview

Paulo Oliveira sat down for an extensive interview with Sporting TV this week. In a relaxed discussion, the central defender started with an appeal for trust.

"Have confidence in the players. They have the quality and character needed and sooner or later they will make everybody smile. Through this negative period we have got together and it is down to us to find solutions. We haven't had to change a lot, because everything we have always done has been with professionalism and sincerity", said Oliveira, going on to respond to a question on how he views himself personally: "I am a relaxed and hard working kind of person. That is part of my personality and I don't want to change it. We mature as we get holder and that is how I approach things. My main characteristic is reading the game and I try my best to understand what might happen."

Oliveira already has a Portuguese Cup and Super Cup to his name in Alvalade and that final win in Jamor is one of his most memorable moments. "The fans really believe in the club and when we win it is great to see how they celebrate. The Portuguese Cup, with the way it was won where we thought everything was lost, was really special", continued the defender, adding an analysis on some of the toughest strikers he has ever faced: "I remember Diego Costa when we played against Chelsea, but also Bas Dost while he was at Wolfsburg. We have spoken about it already and we laughed about a tackle I made that almost ended up with an own goal. It is funny, but thankfully now he plays for my team."

Paulo Oliveira hasn't been a regular this season, but he sees that as a sign of the healthy competition available across the squad: "Sporting CP hsa a lot of quality options for the same position. We fight for a place in the team and it is up to us as players to show that we deserve the confidence of the coach and the president. It is a healthy bit of competition between us."

Sporting CP vice-president Carlos Vieira sat down with Sporting TV this week, to speak in an extensive about the club's finances.

"Sporting CP's accounts are well balanced. We haven't been left wanting for anything recently, especially in relation to football", opened Carlos Vieira, before reflecting on the financial performance of previous boards of directors: "The problems that accumulated in the past have been identified and with financial restructuring we have managed to address them in the long term. We are now in a position to invest, which is what we have been doing. We are working hard on our sports performance and everything that comes with football. In December we agreed a television rights deal and we are producing players who will bring in profit. We are perfectly comfortable with where we are now and were have been praised by UEFA."

Jesus' charges in Iberian Trophy in Badajoz on Tuesday

Sporting TV will transmit a match live for the first time in its history this week.

The match chosen will be Sporting's encounter against Villarreal in the Iberian Trophy, in a 19h15 kick-off in Badajoz.

Sporting TV is now available in Luxemburg through Tango TV.

The new services brings a variety of sports, including all of Sporting B's home fixtures, in the region.

“For us it is an honour to provide Portuguese programming in Luxemburg through Sporting TV. This is part of our efforts to broaden our product range", said Tango TV's marketing director, Luís Câmara.

William: “Have to be focused”

Speaking with Sporting TV about the weekend’s encounter, the Portuguese international proved to be in a confident mood: “It is going to be difficult, against a really aggressive team. We know that we will have to be focused and we will fight for the three points.”